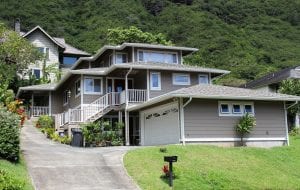 This Manoa rebuild puts its best face forward and fits nicely in its community.

Some neighborhoods are respected for the history and architecture of the homes that line their streets.

Hawaii has its own historically significant neighborhoods. Think of Waialae Nui Ridge, studded with gorgeous homes by famed architect Vladimir Ossipoff or the Craftsman style of the 1920s and ‘30s that makes many homes in Manoa strikingly unique.

Designing a new home or remodel for such neighborhoods can be an extraordinary challenge according to Evan Fujimoto, president of Graham Builders. Yet creating a design that is respectful of its surroundings is simply the right thing to do. 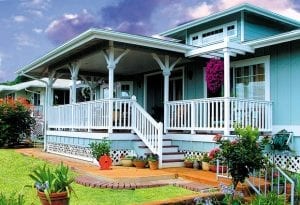 The white rails, post and corbels add charm to the veranda of this Aiea new build.

“We have a diverse culture in Hawaii,” Fujimoto says. “Getting along and respecting each other is big. It isn’t about designing a home that tries to mimic others around it, but you need to be sensitive to the neighborhood and surrounding areas. It’s important to appreciate and honor those who built those neighborhoods.”

To build a modern home that is beautiful and modern while blending in with its surroundings, Graham Builders’ design team suggests approaching each project with careful regard for the community. “The process begins the moment you step foot in any neighborhood and start looking around,” he says. “All good designers consider a neighborhood’s vernacular, and the cultural and historical connections that are revealed.” 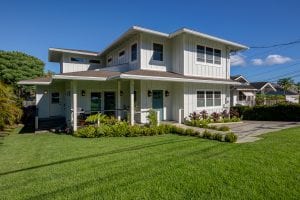 This newly built home was featured in the 2019 Malama Manoa Historic Home Walk.

Last year, Graham Builders completed construction on a new residence on Manoa’s historic Oahu Avenue. “The topography was on a down slope and the garage was at the back of the lot. This helped the other spaces fall into place and allowed us to put the home’s ‘best face’ forward,” explains Fujimoto. A wraparound front deck and board-and-batten exterior walls give the place a true old Manoa flavor. The design was so successful that the residence was featured earlier this summer on Malama Manoa’s Historical Homes Walk. 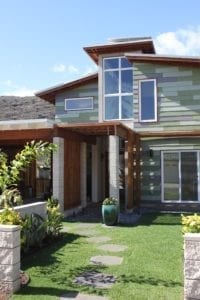 Landscaping and a thoughtful approach allows this contemporary home to fit in nicely with its east Honolulu neighborhood.

If your heart is set on a sleek, ultra-modern design, Fujimoto suggests building in a way that isn’t pretentious or ostentatious. “Also, landscaping is crucial to making a modern home – or any home – fit in better. Strategically placed plants help soften sharp edges, reduce the scale of larger homes and add splashes of color, texture and shadows to homes with flat, muted surfaces.”

Ultimately, Fujimoto reassures us conscientious design, no matter how modern, will always trump a clumsy attempt at historical replication.

“Designs that misappropriate traditional architectural elements often become gross caricatures of tradition,” he says. “When we respect the integrity of existing structures, new architecture can harmonize with old — in sensibility, scale and proportions — and still be an expression of current times.”

Since 1990, Graham Builders has helped hundreds of Hawaii families with the design and construction of functional, beautiful new homes and large renovations. With a focus on multi-generational households, the design-build firm is a recipient of the Better Business Bureau’s Torch Award for Business Ethics. Attend Graham Builders’ FREE “Building Your Home for Life” seminar, Saturday, September 7, 9-11 a.m. at the Honolulu Country Club. Registration is required; visit grahambuilders.com or call 593-2808.

View the article as it appears in Honolulu StarAdvertiser’s Hawaii Renovation section here.