Janet and Richard Honda purchased their home in 1977 when houses were quickly replacing pineapple and sugar cane fields in central Oahu. After 41 years, their beloved home was showing signs of its age. Peeling kitchen cabinets, warping floors, difficult-to-clean louvered doors and crumbling popcorn ceilings were some of the indicators that their residence needed attention. The family decided that it was time to modernize their abode.

These photos are taken from inside the kitchen. Note how spacious the kitchen feels without the hanging cabinets, wall and dark walnut cabinets.

The couple worked closely with their Graham Builders’ design team, and shared their priorities and visions. Their designer helped the couple value engineer their project, so they were able to attain what they wanted within a comfortable budget.

Part of their vision was to modify the living area to better accommodate the large parties that the couple frequently hosts. To achieve this wish and to increase space, light and flow, Graham Builders removed a wall between the living and dining rooms. A complete overhaul of the kitchen resulted in an expansive space that allows conversation between the cooking area and the rest of the great room. A new massive counter easily accommodates over sized island-style potluck buffet. The renovation also included a pantry large enough to store supplies from the couple’s Costco runs. 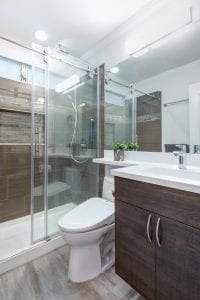 Sliding glass shower barn doors and dark wood cabinets round out this masculine yet elegant bathroom.

“The kitchen is totally different and so, so big!” exclaims Janet. “I’m glad that we chose the white shiny kitchen cabinets, and the slate kitchen appliances and washer/dryer. I love the depth of the kitchen sink with the touch water faucet.”

The Hondas knew building accessibility into their remodel would enable them to stay in their home as they aged. With three decades of designing and building for local families, Graham Builders recognizes the importance of designing homes that make aging in place simple and safe. Many decades-old homes like the Honda’s cannot handle an aging population dependent on wheelchairs, walkers, and oxygen tanks.

Other homeowner renovation favorites include crown moldings that were installed after the popcorn ceiling was removed.

These views are taken from the enclosed patio area. Notice how the wall has been replaced with a large beam, allowing the kitchen to expand.

“We are very pleased with the final outcome of our house,” says Janet. “The crown moldings throughout the entire house are awesome and makes the house look so expensive! Before and after … wow, it’s a showpiece!”

Founded in 1990, Graham Builders remains Hawaii’s only design-build contractor honored by the Better Business Bureau’s Torch Award for Business Ethics. For more information, and a library of award-winning designs, visit grahambuilders.com or call 593-2808.