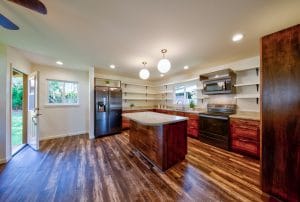 “Open-shelving cabinetry continues to be a popular trend with many homeowners.”

Past generations identified the kitchen as a service space for cooking and cleaning. This outlook often drove the kitchen away from the shared spaces and placed it toward the rear of the home, walled off from living areas.

Fast forward to the 21st century, an era in which most new kitchens are the primary “meeting place” for family and guests. Instead of sipping cocktails and nibbling pupus from the living room sofa, today’s guests want to be part of the kitchen activity.

“The kitchen continues to be one of a home’s focal points,” says Evan Fujimoto, president of Graham Builders. “For this reason, our designers carefully consider the visual and functional style of each home, and how the kitchen flows with the rest of the spaces and the family’s lifestyle.” 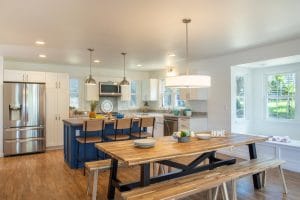 DO IT ISLAND STYLE

The best modern kitchens are designed to be as warm and inviting as they are efficient and smart. A kitchen prep island with plenty of seating is often part of that scheme. Recently, Graham Builders completed a total rebuild for a Pauoa Valley homeowner. The Honolulu design-build firm created a new home whose kitchen included an expansive island and nearby window seat.

The family couldn’t be happier with their new space.

“My older son works on his homework on the kitchen island, while my youngest and I work on the dining table,” says the Pauoa homeowner. “When older brother is done with his work, he plops on the window bench next to the table and watches television.” 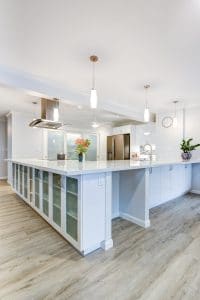 “Bar seating facing our kitchen lets conversation flow, even during cooking and cleaning,” the homeowner says.”

Open-shelving cabinetry continues to be a popular trend with many homeowners. Graham Builders recently featured the style in a design for a homeowner who asked the team to add a new ADU (accessory dwelling unit) to his Wahiawa property for his daughter and son-in-law, who are chefs.

“The best feature is the huge kitchen area taking up an entire side of the living area, with counters all around and an island in the middle,” says the homeowner, who adds that the open cabinets allow equipment and supplies to be just an easy reach away.

The concept of a kitchen that flows seamlessly into a dining area continues to be popular with homeowners, especially those who love to gather with family and friends. During a recent remodel for a Mililani homeowner, the team at Graham Builders implemented her love for entertaining into the kitchen design, which delighted the homeowner.

“Bar seating facing our kitchen lets conversation flow, even during cooking and cleaning,” she says.

The Pauoa Valley homeowner, whose kitchen has become a gathering place for her sons, is similarly pleased with Graham Builders’ vision for her residence.

“The flow of the kitchen is perfectly integrated,” she says. “This is the perfect family home for us.”

Founded in 1990, Graham Builders remains the only local general contractor honored with Better Business Bureau Hawaii’s Torch Award for Small Business Ethics, and was also Oahu’s first design-build general contractor with a certified aging-in-place specialist on staff. You are invited to register for Graham Builders’ free “Building Your Home for Life” seminar, scheduled for Saturday, March 6, at grahambuilders.com/seminar, or call 593-2808.